In the dictionary, the definition of remixing is to: Produce a different version of (a musical recording) by altering the balance of the separate tracks. However, these days remixing is much more than the reproduction of music.

Remixing occurs when the audience uses content in a way that they’re ‘not supposed to’ or isn’t expected of them. This change in the content can cause a different meaning to be exposed, so the content will be received and understood differently. According to Breitz, (cited in Lessig, 2008) once content is released, it is unpredictable how it might get absorbed into the lives and very being of the audience.

Remixing involves the audience interacting with content. One of the first examples of this was when people started to scratch records. Scratch was a new way for people to understand a music record and created a completely new music genre.

These days, while scratch is still among us, it is not alone in the world of reproduction. The audience is no longer an inactive party, they are producing new content based on another piece of content. Parodies are a form of remixing. The following clip has over 3 million views, and shows how the creative reproduction of content can completely change the intended message of the original text.

Bruns (2010) states that when an artist or author produces content, it is not the end of production. Users reproduce this content (he calls them produsers), and the development of content is continuous, always unfinished.

Culture jamming is a form of remixing. Culture jamming in the simplest terms is when a text is altered to give it a new meaning. A common form of culture jamming is the altering of advertisements and logos to change the proposed message of the original text. The following image alters the Pepsi logo and sends a new message about the effects Pepsi has on health. 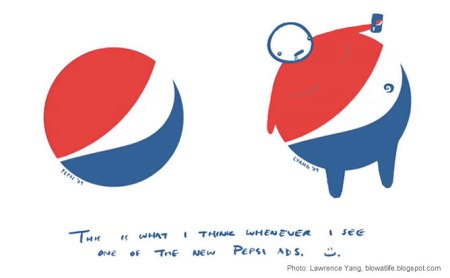 Remixing is growing, with such easy access to content online it isn’t a hard task to reproduce an original text.

The audience are no longer absorbers, and should be recognised to have the potential to reflect culture creatively. (Breitz, 2008)

One thought on “I knew you were trouble – Remixing and Reproduction”

Find What You Need: