Multitasking is not a new concept, however media multitasking (the use of two media technologies/platforms at once) is. With media saturation

While these views on definitions might differ, there is a common consensus that this new trend has major implications in the following areas:

Jeong and Hwang’s research shows that the audience has a lower level of comprehension of media content when multitasking, compared to receiving the content with primary focus. This level of comprehension can differ depending on the tasks, as well as what Joeng and Hwang call the primary-secondary distinction (2012). They believe one of the mediums is the primary focus (having the most attention), while the other/s are the secondary task/s (less attention). This means although multitasking lowers the viewer’s comprehension of the media content, one platform might be understood more because that platform has the majority of the viewers attention. A good example of this is watching a TV program (such as the NRL), while also being on Facebook on a mobile device. The viewer is more likely to pay more attention to the NRL while just scanning the Facebook news feed.

This low level of comprehension can be an issue for media producers. For example, if “Home and Away” broadcasts an episode that needs to be followed properly by the audience for them to understand the plot line, but the audience is multitasking, they might not comprehend what is happening. This lack of understanding might continue through to the next episode, which might lead to more confusion, leading to the viewer turning of the program. 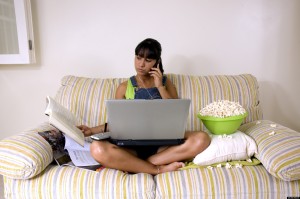 Research by Wang and Tchernev (2012) shows the impacts media multitasking has on students in the classroom. Statistics show that multitasking greatly decreases the level of performance by students when it comes to learning tasks. Studies showed that multitasking slowed the time it took students to read by 21% (Wang & Tchernev 2012). The hypotheses that multitasking inhibits learning is also supported by Sana, Weston and Wineheart, who state that laptop use and multitasking are likely to be a concern for university and college students (2013).

This is an issue I am quite aware of. As a student myself, there are many times I have found myself paying more attention to media entertainment while I should have been focusing on my uni work. Right now I’m writing this blog post while I am watching a terrible movie, and despite my best efforts, the movie seems to be winning when it comes to getting the most attention. I agree that multitasking can be a hindrance to learning in many ways, however I do believe there are also positives to the technologies and media platforms that are providing these opportunities. The issue here is that students have more opportunities to do things they shouldn’t be doing.

While I couldn’t find much research based around this specific impact of media multitasking, as a student majoring in marketing I couldn’t help but think of the consequences. Advertisements aren’t effective unless the audience comprehends the message. This is a hard accomplishment if the audience is distracted by other media platforms. Jeong and Hwang (2012) also suggest that research should be conduct to understand the impact media multitasking has on advertising.

Media multitasking is becoming a normal part of everyday life, and therefore needs to be considered by these parties who are most likely to be affected by it.

Find What You Need: